26.08.2015                            The Department of English held an inter class competition in Narration:    Points to ponder on 26th august, 15 from 2p.m – 3.45p.m in the audio visual room. The participants had to choose an anecdote/ incident which had something to ponder over and had to narrate it within two minutes. The forty five participants were grouped in to intermediate and U.G + P.G. First, second and third prizes were awarded separately for the two categories. The two judges, Mrs. Marjorie Ebenezer and Mrs. K. R. Bhagyamani were former heads of the department. Ms. Ebenezer, in her closing remarks was very appreciative of the narrative skills of some of the participants and the determination and spirit shown by a few participants with speech impairment and language problems. She also landed the novel idea for the competition. 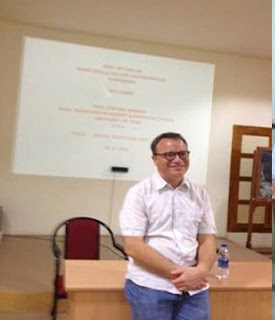 19.12.2015                            The Department organized a guest lecture on “Native Tradition and Land” from 9.45a.m -11.15 a.m in the A.V room. The speaker was Prof. Stephen Warren from the Dept. American Studies and History , University of Sowa, U.S.A. As an author of books on the Shownees Tribe of the U.S and as a researcher with considerable experience of working with natives in reservations, Prof. Warren Delivered an informative lecture on the impact of colonization on the natives, the violence and discrimination they were subjected to, their current status and the U.S govt. policies towards them. The lecture gave a deep insight in to the context of several texts prescribed for study in the U.G and P.G syllabi. II & III year U.G students of literature and I & II year P.G (Literature) attended the session. The lecture was followed by an interactive session where the students and faculty posed several questions on the subject.
on July 20, 2018